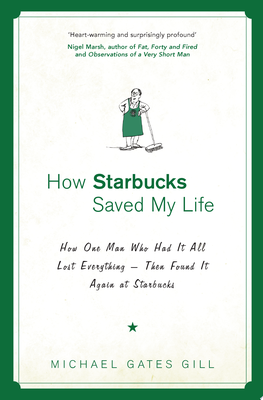 How Starbucks Saved My Life

Mitch Albom meets Nigel Marsh in this moving memoir.In his fifties Michael Gates Gill had it all- a mansion in the suburbs, a loving family, a six-figure salary and a top job at an ad agency. Then, he lost it all. He was downsized at work, an affair ended his twenty-year marriage. He was diagnosed with a slow-growing brain tumour. Gill had no money, no health insurance and no prospects. Then he met Crystal, a Starbucks manager from the other side of town and began a dramatic transformation from a person with ingrained prejudices and class superiority to a humbler, happier person whose world had been cracked wide open.Like Nigel Marsh's hugely successful Fat, Forty and Fired, this heart-warming book describes how one man took life-changing events and embraced them, turning them into something overwhelmingly positive. It also shows, with charming simplicity, how it is still possible for people to help one another, reaching across previous habits of prejudice and distrust, turning failure into success.